1. Which two acronyms represent the data link sublayers that Ethernet relies upon to operate? (Choose two.)

2. A network team is comparing topologies for connecting on a shared media. Which physical topology is an example of a hybrid topology for a LAN?

3. Refer to the exhibit. PC1 issues an ARP request because it needs to send a packet to PC3. In this scenario, what will happen next? 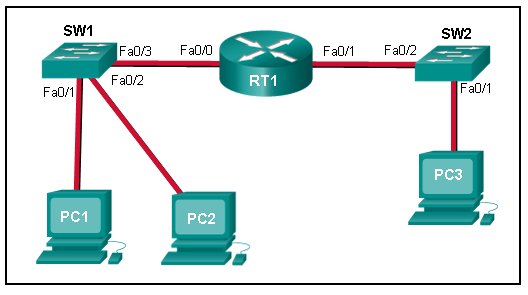 Explanation: The login block-for 180 attempts 2 within 30 command will cause the device to block authentication after 2 unsuccessful attempts within 30 seconds for a duration of 180 seconds. A device inspecting the traffic on a link has nothing to do with the router. The router configuration cannot prevent unauthorized access to the equipment room. A worm would not attempt to access the router to propagate to another part of the network.

5. Which statement describes the characteristics of packet-filtering and stateful firewalls as they relate to the OSI model?

Explanation: Packet filtering firewalls can always filter Layer 3 content and sometimes TCP and UDP-based content. Stateful firewalls monitor connections and thus have to be able to support up to the session layer of the OSI model.

6. What are two ways to protect a computer from malware? (Choose two.)

Explanation: At a minimum, a computer should use antivirus software and have all software up to date to defend against malware.

7. The employees and residents of Ciscoville cannot access the Internet or any remote web-based services. IT workers quickly determine that the city firewall is being flooded with so much traffic that a breakdown of connectivity to the Internet is occurring. Which type of attack is being launched at Ciscoville?

9. What OSI physical layer term describes the measure of the transfer of bits across a medium over a given period of time?

10. Refer to the exhibit. What is the maximum possible throughput between the PC and the server?

Explanation: The maximum throughput between any two nodes on a network is determined by the slowest link between those nodes.

11. Match the description with the media. (Not all options are used.) 12. A client packet is received by a server. The packet has a destination port number of 22. What service is the client requesting?

2. Refer to the exhibit. What does the value of the window size specify?

14. Refer to the exhibit. An administrator is trying to configure the switch but receives the error message that is displayed in the exhibit. What is the problem?

Explanation: In order to enter global configuration mode, the command configure terminal, or a shortened version such as config t, must be entered from privileged EXEC mode. In this scenario the administrator is in user EXEC mode, as indicated by the > symbol after the hostname. The administrator would need to use the enable command to move into privileged EXEC mode before entering the configure terminal command.

Explanation: The ping destination command can be used to test connectivity.

16. What is a characteristic of a switch virtual interface (SVI)?​

The virtual interface lets you remotely manage a switch over a network using IPv4 and IPv6. Each switch comes with one SVI appearing in the default configuration “out-of-the-box.” The default SVI is interface VLAN1.

17. Match the descriptions to the terms. (Not all options are used.) 18. What happens when a switch receives a frame and the calculated CRC value is different than the value that is in the FCS field?

Explanation: The purpose of the CRC value in the FCS field is to determine if the frame has errors. If the frame does have errors, then the frame is dropped by the switch.

19. Two network engineers are discussing the methods used to forward frames through a switch. What is an important concept related to the cut-through method of switching?

20. Which two issues can cause both runts and giants in Ethernet networks? (Choose two.)

Explanation: Because collisions are a normal aspect of half-duplex communications, runt and giant frames are common by-products of those operations. A malfunctioning NIC can also place frames on the network that are either too short or longer than the maximum allowed length. CRC errors can result from using the wrong type of cable or from electrical interference. Using a cable that is too long can result in late collisions rather than runts and giants.

21. Which two functions are performed at the LLC sublayer of the OSI Data Link Layer to facilitate Ethernet communication? (Choose two.)

+ Logical Link Control (LLC): This upper sublayer defines the software processes that provide services to the network layer protocols. It places information in the frame that identifies which network layer protocol is being used for the frame. This information allows multiple Layer 3 protocols, such as IPv4 and IPv6, to utilize the same network interface and media.
+ Media Access Control (MAC): This lower sublayer defines the media access processes performed by the hardware. It provides data link layer addressing and delimiting of data according to the physical signaling requirements of the medium and the type of data link layer protocol in use.

22. Which two commands could be used to check if DNS name resolution is working properly on a Windows PC? (Choose two.)

Nslookup is a tool for testing and troubleshooting DNS servers.

23. A small advertising company has a web server that provides critical business service. The company connects to the Internet through a leased line service to an ISP. Which approach best provides cost effective redundancy for the Internet connection?

24. Only employees connected to IPv6 interfaces are having difficulty connecting to remote networks. The analyst wants to verify that IPv6 routing has been enabled. What is the best command to use to accomplish the task?

25. Refer to the exhibit. A network administrator is connecting a new host to the Registrar LAN. The host needs to communicate with remote networks. What IP address would be configured as the default gateway on the new host? 27. A router boots and enters setup mode. What is the reason for this?

28. What service is provided by POP3?

Explanation: In a peer-to-peer (P2P) networking model, data is exchanged between two network devices without the use of a dedicated server. ​

30. Which command is used to manually query a DNS server to resolve a specific host name?

Explanation: The nslookup command was created to allow a user to manually query a DNS server to resolve a given host name. The ipconfig /displaydns command only displays previously resolved DNS entries. The tracert command was created to examine the path that packets take as they cross a network and can resolve a hostname by automatically querying a DNS server. The net command is used to manage network computers, servers, printers, and network drives.

31. Which PDU is processed when a host computer is de-encapsulating a message at the transport layer of the TCP/IP model?

Explanation: At the transport layer, a host computer will de-encapsulate a segment to reassemble data to an acceptable format by the application layer protocol of the TCP/IP model.

32. Which two OSI model layers have the same functionality as two layers of the TCP/IP model? (Choose two.)

33. Which three layers of the OSI model are comparable in function to the application layer of the TCP/IP model? (Choose three.)

34. Which destination address is used in an ARP request frame?

Explanation: 127.0.0.1 is an address reserved by TCP/IP to test the NIC, drivers and TCP/IP implementation of the device.

36. Although CSMA/CD is still a feature of Ethernet, why is it no longer necessary?

Explanation: The use of Layer 2 switches operating in full-duplex mode eliminates collisions, thereby eliminating the need for CSMA/CD.

37. What does a router do when it receives a Layer 2 frame over the network medium?

Explanation: Routers are responsible for encapsulating a frame with the proper format for the physical network media they connect. At each hop along the path, a router does the following:Accepts a frame from a medium
De-encapsulates the frame
Determines the best path to forward the packet
Re-encapsulates the packet into a new frame
Forwards the new frame appropriate to the medium of that segment of the physical network

39. Which two ICMP messages are used by both IPv4 and IPv6 protocols? (Choose two.)​

41. Three devices are on three different subnets. Match the network address and the broadcast address with each subnet where these devices are located. (Not all options are used.) Explanation: A broadcast address is the last address of any given network. This address cannot be assigned to a host, and it is used to communicate with all hosts on that network.

Explanation: The large number of public IPv6 addresses eliminates the need for NAT. Sites from the largest enterprises to single households can get public IPv6 network addresses. This avoids some of the NAT-induced application problems that are experienced by applications that require end-to-end connectivity.

45. What routing table entry has a next hop address associated with a destination network?

Explanation: Routing table entries for remote routes will have a next hop IP address. The next hop IP address is the address of the router interface of the next device to be used to reach the destination network. Directly-connected and local routes have no next hop, because they do not require going through another router to be reached.

46. Which term describes a field in the IPv4 packet header that contains a unicast, multicast, or broadcast address?

47. If the default gateway is configured incorrectly on the host, what is the impact on communications?

49. Refer to the exhibit. A user issues the command netstat –r on a workstation. Which IPv6 address is one of the link-local addresses of the workstation? 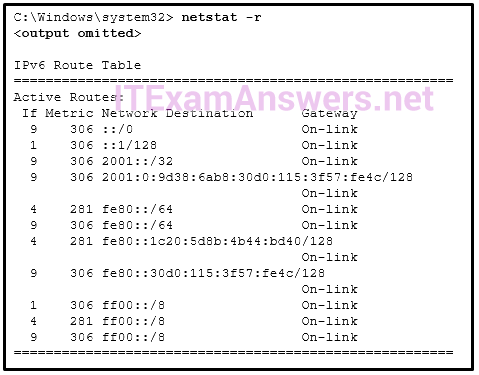 52. Which two devices would be described as intermediary devices? (Choose two.)

54. Refer to the exhibit. The exhibit shows a small switched network and the contents of the MAC address table of the switch. PC1 has sent a frame addressed to PC3. What will the switch do with the frame? 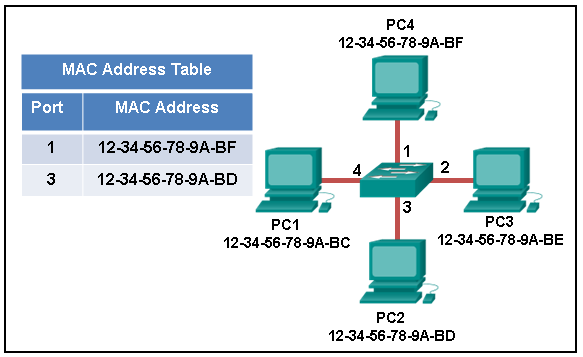 Explanation: The MAC address of PC3 is not present in the MAC table of the switch. Because the switch does not know where to send the frame that is addressed to PC3, it will forward the frame to all the switch ports, except for port 4, which is the incoming port.